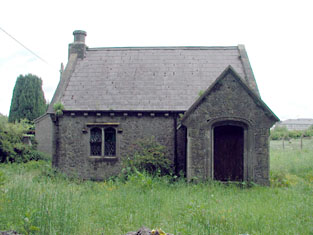 Appraisal
Geraldine Hall, designed by E. McAlister and originally built as a Church of Ireland School, is of considerable social and historical significance as one of the earliest educational facilitates in the locality, and one sponsored by a church body. Now disused, the former school nevertheless retains most of its original form and character – inappropriately extended in the late twentieth century an alternative use might be found for the building that could be contained solely in the original portion of the school, thus allowing the removal of the later addition. The construction of the former school in rubble limestone attests to the high quality of stone masonry traditionally practised in the locality – this is especially evident in the cut-stone dressings to the window openings, and so on, that have retained a crisp intricacy – while the pattern of the polygonal stone arrangement allows for an attractive rhythmic effect. The former school retains many important early or original features and materials, in various states of repair, including diamond-leaded fenestration, timber fittings to the door opening and a slate roof, together with fittings to the interior. Set in its own grounds, the school is an attractive, if subtle, feature on the streetscape of Leinster Street and represents a component of the development of that street throughout the nineteenth century.

This website uses cookies to improve your experience while you navigate through the website. Out of these, the cookies that are categorized as necessary are stored on your browser as they are essential for the working of basic functionalities of the website. We also use third-party cookies that help us analyze and understand how you use this website. These cookies will be stored in your browser only with your consent. You also have the option to opt-out of these cookies. But opting out of some of these cookies may affect your browsing experience.
Necessary Always Enabled
Necessary cookies are absolutely essential for the website to function properly. This category only includes cookies that ensures basic functionalities and security features of the website. These cookies do not store any personal information.
Non-necessary
Any cookies that may not be particularly necessary for the website to function and is used specifically to collect user personal data via analytics, ads, other embedded contents are termed as non-necessary cookies. It is mandatory to procure user consent prior to running these cookies on your website.
SAVE & ACCEPT
PAGE TOP